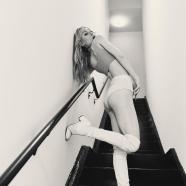 Posted by ErikRaymond on September 28, 2020 in Arts & Entertainment | Leave a comment

New York City native singer/songwriter & 2020 artist to watch Leyla Blue releases a new song and music video “Company” following up the release of her stunning debut EP Songs For Boys That Didn’t Text Me Back, that features her first pair of soul-drenched singles, “Silence” and “What A Shame.” Sonically, Leyla is described as the offspring of Lorde and Destiny’s Child and her music plays on the juxtaposition of both artists. “Company” is a deeply personal delivery from Leyla that speaks on a girl battling her own demons. The music video, which was shot on an iPhone during quarantine with edits by Leyla, is a dark and shadowy aesthetic showing Leyla having an intimate conversation with her own reflection and performance vignettes throughout the visual. “Company” is the first release of new music to come from Leyla this year.

For those raised on Britney Spears’ generation of pop artist, a recording career seemed like a shortcut to fame and fortune. For Leyla Blue, born months after Rolling Stone splayed Spears across satin sheets as the face of teen superstardom, music meant something different. The now 20-year-old singer-songwriter sees pop music as an under-utilized vehicle to communicate a distinct perspective, rousing awareness via reactive emotion. Leyla Blue lenses music not as magazine covers, but a Trojan horse — facilitating universal connection one radio-ready bop at a time.

Blue is the daughter of two successful photographers, but it’s New York she credits for creative prowess. When it came to her musical education, the city was “everything,” she claims, spending her adolescence composing music every day in her bedroom before becoming a professional songwriter at 16. But the latter brought its own set of challenges. Blue became increasingly frustrated how pop music was mechanicalized, with “a bunch of people sitting around trying to work out what a young female artist might be thinking.” When a producer suggested she should focus on her own artistry rather than formulating that of others, Blue knew she needed re-orientate.

Accepted into the prestigious Clive Davis Institute of Music at NYU, Blue approached her studies with the same fervency she did her initial entry into the industry. A Christina Aguilera-obsessive (ironically the artist to whom she’s now most frequently compared), Blue spring boarded off soulful Y2K favorites until her output sat in the sonic middle ground of Destiny’s Child and Lorde. She committed to lyrically driven creations, resolving to hold nothing back from listeners and concurrently rebut her father’s belief that all pop music was “plastic.” Still, while it’s emboldening to sing of rejection and mental illness as a young woman, even title a debut EP, Songs For Boys Who Didn’t Text Me Back, the tradeoff of oversharing is that a whole host of strangers now know every intimate detail of Blue’s life.

“It’s a weird conundrum,” the singer admits. “But when I make sense of something myself and own up to it, I feel empowered. I can’t control the chemicals in my brain, but I can understand it and direct it towards something productive. My OCD and eating issues have absolutely what has made me who I am, so I’m just telling my story and hope that inspires others to be open about their own story.

A recent Island Records signee, Blue is preparing to release a new body of work. Her unwavering vulnerability means Blue maintains the same group of close collaborators, working with the same female producer and editing her own visuals shot by her mother. It’s a conscious departure from the hyper- manufactured pop landscape to which she listened to and lived, and for good reason. Because Leyla Blue knows earning the trust of arena-sized audiences requires bold authenticity. Leyla Blue knows it’s not enough to “talk the talk” when you’re walking at a different pace. Leyla Blue knows the power of pop, and she plans to harness it. “I’m just starting out. There’s so much more I want to do and so many more people I want to reach. For me, the ‘I made it’ moment is some manifestation of inspiring or helping others to reach their potential — having a real effect on a life.”