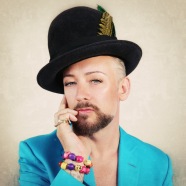 Enter to Win ‘This is What I Do’ From Boy George

Posted by ErikRaymond on March 8, 2014 in Giveaways | 3 Comments

An exclusive Deluxe Edition of ‘This Is What I Do’ will be released on George’s own imprint ‘Very Me’ Records via Kobalt Label Services and will be available in all physical retail, digital download and streaming services from March 25th.

For your chance to win a copy, Comment below with the name of your favorite Boy George / Culture Club song. Winners will be chosen at random Tuesday, March 25 at 6pm ET.

Boy George needs little introduction. With a career spanning over 30 years, he first shot to international stardom in the 1980’s as the front man of one of the UK’s biggest exports of the 20th Century, Culture Club. A multi-racial band, with an openly gay front-man, Culture Club was ahead of the curve and went on to become the first group since The Beatles to have three Top Ten hits in the United States from a debut album alone. With 7 Top Ten U.S singles under his belt, and continued success as a solo artist — over 150 million records sold with top 10 hits in every country — Boy George aka George O’Dowd is without doubt a living legend. He’s also one of the first true unapologetic innovators in the music world and of our time.

He has been interviewed by prime time and late night legends such as Johnny Carson, Barbara Walters, David Letterman, Joan Rivers, and Howard Stern.

He has also received international acclaim and awards for his contributions and work in music, including being part of Bob Geldof and Midge Ure’s charity super-group Band Aid (‘Feed The World’). Alongside his band mates in Culture Club, George received ‘Best New Artist’ at the 1984 Grammy Awards, and cheekily accepted the nod via satellite with the message, “Thanks America. You’ve got style, you’ve got taste, and you know a good drag queen when you see one.”

George is also a hugely respected house DJ, playing for twenty years and continuing to DJ successfully in clubs all over the world. However, it is his new album ‘This Is What I Do’, that reinforces his first true love, writing and singing.

Now, a dedicated Nichiren Buddhist, George has been focusing his energy on this new album, his first studio full-length in 18 years.

‘This Is What I Do’ was written by George and longtime writing partners John Themis, Kevan Frost and Richie Stevens (Soul II Soul, Tina Turner, Culture Club). Richie Stevens produced the record at London’s Cowshed Studios and it was mixed by Dave Bascombe (Tears For Fears, Depeche Mode, Doves).

The album features collaborations with the legendary producer Youth (Siouxsie & the Banchees, Primal Scream, The Orb, U2, Depeche Mode), as well as a string of stellar guest musicians including DJ Yoda, Kitty Durham (Kitty Daisy & Lewis), Ally McErlaine (Texas / Red Sky July), MC Spee (Dreadzone) and Nizar Al Issa, many of whom will perform as George’s band on his live dates.

“I wanted to make a baggy album, not overproduced and I think I have achieved it. I was listening to things like ‘Beast Of Burden’ by The Stones, and I had my head most definitely in the 70’s… I was also writing from a happy place. This time, no ex-lovers to get revenge on. For me ‘Bigger Than War’ sums up the tone.” Says George of ‘This Is What I Do’.

An exclusive Deluxe Edition of ‘This Is What I Do’ will be released on George’s own imprint ‘Very Me’ Records via Kobalt Label Services and will be available in all physical retail, digital download and streaming services from March 25th

Boy George plans to take ‘This Is What I Do’ and his 9-piece band on the road in North America. See tour dates below :