It was a night in a time capsule. You can’t think of the mid 90’s without thinking of alt rockers Collective Soul and Live. Both performed to a capacity crowd at St. Petersburg’s Mahaffey Theater on March 2. Ed Kowalczyk, former lead singer of the alternative band Live opened the show.  The charismatic crooner showered […] 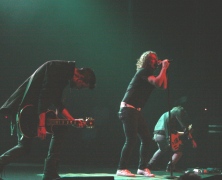