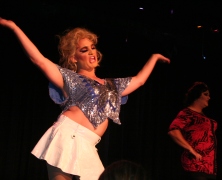 Have a laugh Monday, December 9 at The Venue at 8pm. Proceeds from the show will benefit The Barber Fund, a local cancer charity named after Miss Comedy Queen 2009 John Barber aka “Tweeka Weed.” This fun-filled evening will feature performances from Miss Comedy Queen winners & contestants. Cocktail hour at 7pm. Show at 8pm. […]

Have a laugh August 5th and 6th with some bawdy babes. Parliament House’s Footlight Theatre will play host for the Annual Miss Comedy Queen Pageant! Now in its ninth year, the pageant has officially become a nationally recognized pageant. What makes this pageant especially fun is that each queen  is judged strictly on comedic value. […]

The original drag – queens of comedy turned it out at the Miss Comedy Queen Revue Show! On Wednesday, May 29 at Parliament House, this fundraiser benefited The Barber Fund, a local cancer charity named after Miss Comedy Queen 2009 John Barber aka “Tweeka Weed.” The night  consisted of raucous performances by Ginger Minj, The […]