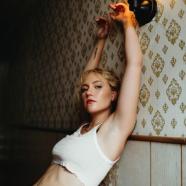 Posted by ErikRaymond on December 23, 2020 in Arts & Entertainment | Leave a comment

Produced by Sir Nolan [Demi Lovato, Justin Bieber] and Simon Says [Selena Gomez, Bryce Vine], the track charges forward on soundtrack-worthy percussion and sweeping guitars as Kat’s overpowering vocals ring out. It culminates on an entrancing and empowering hook that’s impossible to shake as it announces their arrival. Meanwhile, the music video reflects this same spirit as an equally energetic vignette.

Recently, Kat wowed a QT audience with a highly-trafficked livestream on Twitch Music. Fans sang their praises with comparisons to Adele and Florence + the Machine, yet they ultimately stand on their own. Making even more headlines, they also can be seen in the EMMY Award-winning hit NETFLIX teen drama Trinkets (second season released on August 25).

LAVA C.E.O. and Founder Jason Flom commented, “Kat Cunning is a rare breed of artist; they evoke memories of some of the greats but with a brand new musical approach that is distinctly and beautifully theirs and theirs alone. Get ready, world!”

Kat added, “I wrote this song while I was falling for a girl who I knew would break my heart.  She was beautiful to me like a Supernova (a big rainbow ball of gas exploding into iridescence) and I knew that my draw to her could only leave me with my face hair singed off. The lyrics are an expression of the bravado and masculinity I embody when I am falling for a girl. I wrote it to celebrate that power of love- how it can make us feel 3x our size and even overpromise things we have no control over. I hope it accompanies the lovers who would rather burn at the hands of something supernatural than watch through a telescope a million miles removed.”
Their debut EP will be coming down the pike soon.

With a traffic-stopping voice and powerful presence, Kat Cunning adds soulful grace to anthemic alternative pop. An accomplished screen and stage talent, they appeared on Broadway as Emile in Les Liaison Dangereuses and in Cirque du Soleil in addition to acting alongside James Franco in HBO’s hit The Deuce. 2019 saw Kat make their musical debut with fan favorite singles such as “King of Shadow,” “Birds”, and “For The Love.”  Not to mention, they supported LP on a sold out U.S. Tour and received praise from Nylon, Teen Vogue, New York Times, Earmilk, and more. Kat will also be a principal in the upcoming Jennifer Lopez film, Marry Me.

Like Loading...
← ‘The Jinkx & Dela Holiday Special’ Comes to Hulu Sophie Ellis-Bextor’s ‘Songs From the Kitchen Disco’ is Out Now →