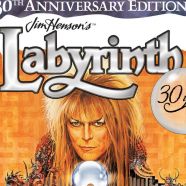 Posted by ErikRaymond on May 7, 2016 in Arts & Entertainment, Upcoming Events | Leave a comment

This year marks the 30th anniversary of the cult classic Labyrinth. Fu*#, I’m old. It also symbolizes a time in history for burgeoning gay boys, who found themselves wondering what was going on in  David Bowie’s pants!

A new 30th-anniversary release of Labyrinth pays tribute to the late Jim Henson but also to its iconic Goblin King, David Bowie.

The 1986 film is coming to select theaters around the country Sept. 11 and 14 through Fathom Events. Plus, the musically fantastical film — directed by Henson, executive produced by George Lucas and scripted by Terry Jones of Monty Python fame — will be re-released with anall-new a new anniversary edition on Blu-ray, DVD and 4K Ultra HD on Sept. 20.

Labyrinth stars Jennifer Connelly as a 16-year-old girl who wishes for her baby brother to be taken away, but then has 13 hours to solve a complicated maze in order to rescue her sibling from the Goblin King played by Bowie, who died in January this year at the age of 69.