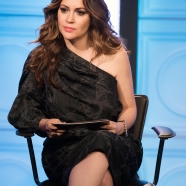 Posted by ErikRaymond on February 3, 2016 in Arts & Entertainment | Leave a comment

Thirteen of television’s most memorable and talented designers make their way back to the workroom to try to sew up a win on season five of Lifetime’s hit series Project Runway All Stars (#PRAllStars), premiering Thursday, February 11 at 9pm ET/PT. The designers will have a new twist to contend with this season as Alyssa Milano, Isaac Mizrahi and Georgina Chapman will be judging an “anonymous runway” for the very first time and won’t know which designer created each garment. Zanna Roberts Rassi returns as the designers’ mentor.

The winner of Project Runway All Stars Season five will receive the opportunity to design an exclusive line of jewelry for Baublebar.com as well as a capsule collection by Chinese Laundry. The winner also receives a fashion spread in Marie Claire magazine and a position as contributing editor for a year, and a complete sewing studio from Brother Sewing and Embroidery. To top it off, the winner receives a $100,000 grand prize to elevate their business and brand.