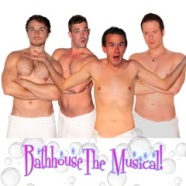 Tim Evanicki Productions and The Parliament House Welcome Back the Award-Winning Bathhouse: The Musical to the Footlight Theatre

Tim Evanicki Productions and The Parliament House are excited to announce the triumphant return of the award-winning show Bathhouse: The Musical! to Orlando! The show, which premiered at the 2006 Orlando International Fringe Theatre Festival, has since played in several cities around the US, Canada, and Europe including sold-out productions in Paris, London, Atlanta, Fort Lauderdale, Cleveland, Montreal, Ottawa and Tampa!

Originally conceived by Tim Evanicki and Esther Daack, both from Orlando, Bathhouse: the Musical! follows young Billy at his first day at the baths. He’s looking for love, but soon realizes the other patrons are looking for something a little more temporary. This toe-tapping, ass-slapping, towel-snapping gay-themed musical, is full of playful, adult humor, and of course, scantily-clad men in bath towels.

On November 1, Bathhouse: The Musical! will be presenting a special performance in celebration of their 10th year, in which they will welcome to the stage cast members from productions around the world over the past 10 years including the 2006 Original Orlando Cast, the 2007 Atlanta Cast, the 2008 US National Tour, the 2009 Tampa Cast, the 2010 Paris Cast, and the 2014 London Cast (additional cast members will be confirmed later, and the list is subject to change).

Co-creator Tim Evanicki will direct this production, and will feature a cast of all local performers (John Jenkins, Benjamin Smith, Sean Philibin, Tony Flaherty; Understudies Chris McCabe and Sean Michael Flynn). This production will also go out on Bathhouse: The Musical’s 10th Anniversary National Tour in the Spring and Summer of 2016!

For your chance to snag a pair of tickets, simply Like this post. Winners will be chosen at random, Monday, October 19 at 6pm ET.