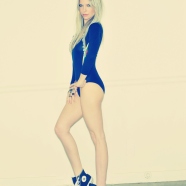 Damsel (Not) In Distress: Singer, The Damsl Speaks Surviving Abuse, Pride and Her Debut EP

Posted by ErikRaymond on September 28, 2015 in Arts & Entertainment | Leave a comment

Midwest-born, The Damsl, a former Ford model and actress, is quickly becoming a pop powerhouse. Her songs have appeared in major campaigns for companies like Volvo, and on MTV and VH1. Her debut single “StraitJacket” offers up an electric, high-energy, EDM sound, but at the same time addresses issues of self-identity, overcoming past struggles and surviving abuse. With “StraitJacket” The Damsl offers a deeply personal and empowering dance track that celebrates the power of overcoming adversity.

The flamboyant virtuoso was discovered by Lady Gaga’s talent scout, Wendy Starland, in New York City and was quickly signed by Motti Shulman, President of MoGold Records and veteran Atlantic Records Promotion and Marketing executive. Since relocating to LA, she has developed and nurtured her own unique musical style that meshes powerful lyrics with progressive beats, hooks, and undeniable swagger.

The Damsl recently embarked on a national club tour, which kicked off at LGBT nightspot Tiger Heat, Avalon in Hollywood, September 17. Her shows rock everything from deco costumes, innovative choreography, to an interlude of classical piano thrown into the middle of a DJ set. We talked candidly with the staunch singer, photographer, pianist – turned advocate.

Erik Raymond: What can fans expect with this tour?
The Damsl: There are many surprises during the show. I stand on top of a 4 foot contraption in a custom white, 8 foot long straitjacket dress designed by Cosmo and Nathalia on Melrose. The height symbolizes the LGBT community, and survivors everywhere, having risen above the masses, having won many feats this year. Like any art, the song can be interpreted in different ways. We’ve always hoped the LGBT crowd really gets into the song and makes it their own.

Do you have plans to put out a record in the near future? If so, can you tell us more about it?
We are currently putting out the EP for “StraitJacket” and finishing the record. I’m trying to choose the title of the record. It’s between “The Hunt” and “Linen”, which is from one of the raps on a new song “We took it off, now we’re winnin’, turned those straitjackets into linen!”

The first single is said to speak to the serious issue of sexual abuse. Without trying to be too intrusive, can you elaborate on why you chose that subject matter?
When I spoke about my own abuse, I was silenced in a pretty heavily, dramatic way. I want to make sure that the laws necessary to help survivors feel strong about telling the truth are changed forever.
You can see the denial is still rampant in the reaction people had to the first few women that came out about Cosby. No one believed them. And particularly how they were treated when they came out in the 80s. This is changing, but there’s still wrongly placed blame around what goes on. The PTSD and everything else that happens to survivors doesn’t belong on them – the blame and consequence belongs on the perpetrators of these violent crimes, and the fear of telling on them, whether they are people close and familiar, friends, or even an actual family member, belongs on them. Even with the strides we’re making now, there’s still a stigma attached to those who speak about it and I would love to see that change.

With that, I read that your music serves as a vehicle to help your fans with self-identity, overcoming past struggles and surviving abuse. Among others, you will undoubtedly speak to your LGBT audience.
Thank you. It’s a very similar issue among the LGBT community- the oppression needs to continue to be stopped. And then it would be great to see amends made with some restitution!

Going back a bit, how did you get your start in music?
I must’ve been nine or 10. When I moved to NYC, I auditioned for a girl group for RCA and the next day I got a call that I didn’t get a call back but to call the guy. He just wanted to talk to me, I guess. He then CC’d me on an email with many, many other industry people and I sent some photos and a link to a song to each one. Eventually one of those guys was at Atlantic records and gave me my first deal. I met Motti Shulman, VP of radio Atlantic here in Hollywood, sent him music a few months later and had a deal with him the next day. He was the person who believed this record could be great for the LGBT community!

What made you transition from modeling and acting to music?
I knew it was a form of running, in a way, to be doing everything. So, I decided to focus and give myself a sane life and focus on music. It was a wing on a prayer, but I’m so glad I did!

Why the name “The Damsl”?
My initial name was Harleqwin Damsl. We stood in line at Pinkie’s and thought of it, me and my friend Bruce Devan, a movie producer here in LA. He’s no longer with us, so I wanted to keep the name forever because he helped change my feelings about men. He was a treasured friend and showed me what it meant to go through the trials of a relationship without ego. I didn’t know at the time why the words meant something to me but I think the damsel shown in an empowered way is fun because you know what they say- it’s the end of the story that matters. I also like it in French. “Le Damoiselle”

From Michigan to L.A.?! That must’ve been quite the change?
I actually moved to New York City for a bit before LA. Coming out to LA was way easier! Now I get to feel what it’s like to finish a thought. I’m in a sweet spot here in LA.

How did you spend your last day off?
On my days off, I hit the thrift shops! I find vintage pieces and paint them. My friend Bria got me obsessed with shabby chic! It’s not something we had room to deal with in New York City. One day I may open a shop called, “Damsl’s Distressed”.

Like Loading...
← Enter for a chance to win a ‘STONEWALL’ prize pack! Enter To Win ‘I Cry When I Laugh’ From Jess Glynne! →