Home » Giveaways » Enter to Win ‘All For You’ From Emily West! 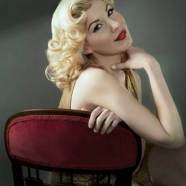 Enter to Win ‘All For You’ From Emily West!

Posted by ErikRaymond on August 13, 2015 in Giveaways, Upcoming Events | 5 Comments

Singer-songwriter and vocal powerhouse Emily West will release her debut album, All For You via Portrait/Sony Music Masterworks on August 14th. The album is available for pre-order now.  All For You features the first single “Bitter.”

For your chance to win a copy, Comment below with “I’m bitter!” Winners will be chosen at random, Thursday, August 20 at 6pm ET.

Driven by her love and fear of New York City, West got on a plane, got lost on the subway, and found herself auditioning for America’s Got Talent. This gave her the opportunity to demonstrate her vulnerability and versatility to a wide audience. As a finalist on Season 9, West won crowds over, including AGT judge Howard Stern, with re-imagined version of songs like the Moody Blues’ “Nights in White Satin,” Sia’s hit “Chandelier,” and Cyndi Lauper’s classic “True Colors,” all of which appear on her upcoming album, along with three original songs. Lauper, one of West’s greatest supporters and mentors, performed “True Colors” on AGT with West, a track which resonated with fans from multiple generations.