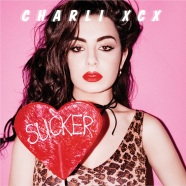 Charlie XCX’s new album featuring the #1 Smash “Boom Clap” plus “Break The Rules” and “Breaking Up”  is available now!

For your chance to win a copy, Comment below with “Boom Clap!” Winners will be chosen at random, Sunday, Dec. 28th at 12pm ET.

Over the last 18 months 22 year-old singer/songwriter/artist Charli XCX’s rise to international pop stardom has been nothing short of meteoric. From releasing her dark-pop record “True Romance” in 2013 to a wealth of critical acclaim, Charli has toured the globe with the likes of Coldplay and Ellie Goulding, written and featured on one of 2014 and 2013’s biggest hits, four million-selling hit ‘Fancy’ with Iggy Azalea, ‘I Love It’ with Swedish duo Icona Pop, scored a UK and US Top 10 hit with ‘Boom Clap’ + more released smash single ‘Break The Rules’ off a forthcoming sophomore album, “SUCKER” arriving December 16th via Neon Gold/Atlantic Records. “Boom Clap,” “Fancy” and “I Love It” combined have sold over 14 Million copies worldwide.

Like Loading...
← Enter to Win ‘ANYBODY WANNA BUY A HEART?’ From K. Michelle! Don’t Rain on My Charade →