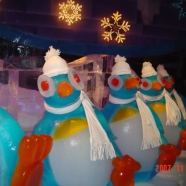 Posted by ErikRaymond on December 10, 2014 in Upcoming Events | Leave a comment

With so much going on during the holidays, you might be missing out on some pretty neat happenings in Central Florida. I’ve compiled a list of my not-to-be-missed choices:

[Hall & Oates] – Maxwell C. King Center, Melbourne – Daryl Hall and John Oates are the number one selling duo in music history! 2014 marks their induction into the Rock and Roll Hall of Fame. Starting out as two devoted disciples of earlier soul greats, Daryl Hall & John Oates are soul survivors in their own right. One of the most sampled artists today, their impact can be heard everywhere from boy band harmonies, to neo-soul to rap-rock fusion. From the mid-’70s to the mid-’80s, the duo would score six #1 singles, including Rich Girl, Kiss on My List, Private Eyes, I Can’t Go For That (No Can Do), Maneater and Out of Touch. Dec. 10

[Dirty Dancing Live] – Moran Theatre Times Union Center, Jacksonville – You will have “Hungry Eyes” as the classic film comes to the stage, portraying the love story of Baby and Johnny, a boy and girl from opposite sides of the tracks. Dirty Dancing features many of the fan-favorite songs, including “Hungry Eyes,” “Hey Baby,” “Do You Love Me?” and the heart stopping “(I’ve Had) The Time of My Life.” Thru Dec. 14

[Phantom of the Opera] – Dr. Phillips Center, Orlando – The Voice alum Chris Mann, stars in this acclaimed sold-out tour of the United Kingdom. Cameron Mackintosh’s spectacular new production of Andrew Lloyd Webber’s phenomenal musical success, The Phantom of the Opera is hailed by critics as “bigger and better than ever before.” This production boasts many exciting special effects including the show’s legendary chandelier, new scenic and lighting designs, new staging and choreography. The beloved story and thrilling score will be performed by a cast and orchestra of 52, making this Phantom one of the largest productions now on tour. title role. Thru Dec. 14

[THE VERY FIRST CHRISTMAS] – The Breakthrough Theatre, Winter Park -Capture the Christmas spirit with this religious musical about the first Christmas. Dec. 12 – 14

[Usher: The UR Experience] – Amway Center, Orlando – Along with special guests August Alsina and DJ Cassidy, NBC’s The Voice coach will bring his high-energy tour to Orlando. He has won numerous awards including 8 Grammys and was named the #1 Hot 100 artist of the 2000s decade. Billboard named him the second most successful artist of the 2000s decade, with his career-propelling 2004 album “Confessions” being ranked as the top solo album of the 2000s decade. His hits include “Yeah” & “OMG.” Sadly, I hear the Honey Nut Cheerios honey bee Buzz Bee won’t be there. Dec. 12

[Dinner & a Movie] – Lake Eola, Orlando – Grab a seat at the Walt Disney Amphitheater for a special showing of your favorite Christmas movie, Elf! The film starts at 7 p.m. – Dec. 12

[SantaCon] – Graffiti Junktion – Orlando – A SantaCon is celebrated all over the country and is simply a gathering of people dressed as Santa that go as a group from Restaurant and Bars celebrating the Holiday Season with some tasty Libations! There will be prizes for: Best Mr. and Mrs. Santa, Sexy Santa, Best Overall Santa. This could get interesting. Dec. 13

[The Singing Christmas Trees] – First Baptist, Orlando – From its beginning over three decades ago, The Trees have become one of Central Florida’s most loved and spectacular traditions. Featuring a huge choir, full orchestra, worshipful dance, powerful drama and a beautiful display of 250,000 lights, The Singing Christmas is an exciting presentation of Christmas classics and the pageantry of our two 40-foot-tall Christmas Trees. Thru Dec. 14

[Mix 105.1’s All I Want For Christmas Show Starring: Daughtry, Ingrid Michaelson & O.A.R.] – House of Blues, Orlando – Hunky American Idol alum, Daughtry will headline this rockin’ holiday show. His hits include “Waiting for Superman” & “What About Now?” The event will feature soulful Maryland band O.A.R., known for their hits, “Shattered” & “Peace.” Ingrid Michaelson will round out the evening with her energetic hits like “Girls Chase Boys” & “Afterlife.” Dec. 15

[A Very Beary Christmas] – Parliament House, Orlando – Sponsored by Bears in the City and hosted by Chantel Reshae, the event returns to PH for the fourth year. They’ll be offering a night of live entertainment, a holiday vendor fair, raffles, Bearaoke, and a visit for the jolly old St. Nick himself! Bring a new, unwrapped toy to be donated to local children in need this holiday season and get a free raffle ticket! Raffle tickets sold will benefit the GLBT Community Center of Central Florida! Dec. 16

[7th Annual BROADWAY CHRISTMAS Benefiting The Trevor Project] – Southern Nights, Orlando – Over 50 of Central Florida’s top entertainers will be joining hands to bring the community together in hopes of raising money for The Trevor Project. Hosted by Axel Andrews, PEPE & Addison Taylor, Broadway Christmas will be filled with comedy, raffles and great music from many of your Broadway favorites! Dec. 18

[How the Diva Stole Christmas] – Sun on the Beach, Kissimme – The Diamond Divas present this divalicious drag rendition of the holiday classic. Dec. 18

[Mickey’s Very Merry Christmas Party] – Disney’s Magic Kingdom, Orlando – Mickey and the gang are hosting the veriest, merriest, Christmas party of the season! During select nights at Magic Kingdom Park, the entire family can enjoy, including an extra-merry holiday parade and fireworks, complimentary cookies and cocoa & a special castle-lighting show with the stars of Disney’s Frozen. Select nights thru Dec. 19

[A BREAKTHROUGH FAMILY CHRISTMAS] – The Breakthrough Theatre, Winter Park – Past and present performers at the theater share Christmas songs and stories. Dec. 19 – 21

[The Mix 100.7 Mistletoe Show] – The Mahaffey, St. Petersburg – Running at full speed with the brand-new, Top 5 album Bulletproof Picasso, the platinum-selling band Train will visit The Mahaffey Theater for Mix 100.7’s annual holiday-season concert. With a resume packed with smashes like “Drops of Jupiter,” “Hey, Soul Sister” and “Drive By,” Train is one of the most successful alternative-rock bands of the last decade. The Mix 100.7 Mistletoe Show will also feature LGBT ally singer/songwriter Matt Nathanson, with special guests to be announced soon. Nathanson’s new single, “Headphones,” is an uplifting and unforgettable dance-ready rock track and the power ballad “Run,” featuring fellow LGBT ally Jennifer Nettles of Sugarland. Dec. 19 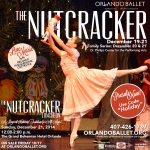 [The Orlando Ballet Presents…The Nutcracker] – Dr. Phillips Performing Arts Center, Orlando – Dancing snowflakes, sugar plum fairies and men in tights; can’t get much gayer than that. Seeing this ballet is quickly becoming a holiday tradition for me. Could be because I’m a control freak and a ball-buster. Dec. 19 – 21

[The SantaLand Diaries] – The Queen’s Head Theatre, Winter Park – Best-selling author David Sedaris’ The SantaLand Diaries is the story of an out of work actor taking a job as Crumpet, a Macy’s Christmas elf, in 1989. Now in his mid-fifties, Crumpet’s hilarious recount of the trials and tribulations that the Holidays bring is sure to bring a smile to even the grouchiest face! Thru Dec. 21

[22nd Annual Christmas Walk] – Downtown Mt. Dora – Make a stop during the 2014 Christmas season in Mount Dora! The Lights will be on nightly until the Art Festival in February. Celebrate the 2014 holidays against a backdrop of two million+ sparkling lights in beautiful downtown Mount Dora! They will also host to numerous events and celebrations that will bring magic to your holiday season! Thru Dec. 22

[Wanzie’s Orange Blossom Trail “Living Nativity” Christmas Spectacular] – The Footlight Theater, Orlando – From the mind that brought you Ladies of Eola Heights and Wanzie’s Glittering Star-Studded A Christmas Carol, Wanzie offers up high-camp, variety-show style numbers and an unedited take on the first Christmas. This unconstrained depiction combines politics, religion and a modern-day twist on the Nativity story. Thru Dec. 22

[A Christmas Story: The Musical] – The Orlando Rep, Orlando – This Tony-nominated Best Musical tells the classic account of Ralphie Parker’s hilariously desperate quest to ensure that the most perfect of gifts ends up under his tree this Christmas – a Red Ryder® Carbine-Action BB Gun! All the cherished moments are here – the Old Man’s leg lamp, the tongue-on-a-flagpole, the bunny suit, the Santa slide, and all of Ralphie’s extravagant daydreams! Enjoy the perennial favorite in a new way. Thru Dec. 28

[Charles Dickens’ A Christmas Carol]– Margeson Theater at the Orlando Shakes, Orlando – If you’re looking for the classic, Orlando Shakes’ got you covered. Plus, the guy who plays Bob Cratchit is a stone fox! Thru Dec. 28.

[8th Annual Christmas Dinner at The Island of Misfit Toys] – Savoy, Orlando – Savoy Orlando invites you to an amazing dinner from Dubsdread Catering and SAVOY Orlando!! Complimentary wine from Ivanhoe Wine & Spirits!! Raffle rrizes and a silent auction with all proceeds to benefit Project Pruitt. Dec. 30

[Epcot’s Candlelight Processional] – Disney’s Epcot – Lake Buena Vista – Join your favorite stars as they recite the biblical account of a savior born to a virgin in Bethlehem. All the while, gorgeous choral pieces are woven into the production as an orchestra and choir provide an inspirational backdrop with songs of hope and joy. Celebrities include Chita Rivera, Ana Gasteyer, Marlee Matlin & Isabella Rossellini. Thru Dec. 30

[ICE!™ featuring The Nutcracker] – Gaylord Palms, Orlando – Experience the magic of The Nutcracker in ICE! Join Clara and her Nutcracker Prince for a magical adventure in more than two million pounds of hand-carved ice sculptures, six rooms and four thrilling slides! Relive your favorite scenes from the classic ballet, accompanied by the original Tchaikovsky score. Thru Jan. 4
[Light Up UCF] – CFE Arena, Orlando – Back for its seventh season, Light Up UCF will be Bigger, Brighter, and Brrr-ier this year! All your favorite attractions are back including the Ferris Wheel, Blizzard, Ice Skating, free holiday films, and, of course, the FREE Light Show and snow! Thru Jan. 4