Home » Giveaways » Enter to Win ‘THE CITY BELOW’ EP FROM MACKINTOSH BRAUN! 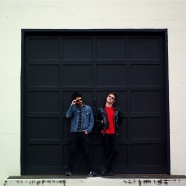 Enter to Win ‘THE CITY BELOW’ EP FROM MACKINTOSH BRAUN!

Posted by ErikRaymond on October 31, 2014 in Giveaways | 2 Comments

Mackintosh Braun‘s debut EP “The City Below EP” (Chop Shop Records) is out now.  The EP includes the high-spirited, hooky anthem “Never Give In,” which was featured in the film and on the soundtrack to Veronica Mars earlier this year. The City Below EP was produced by Lars Stalfors (Mars Volta, Cold War Kids, Matt & Kim).   For your chance to win a copy, Comment below with “Never Give In.” Winners will be chosen at random, Friday, November 7 at 6pm. The band, together since 2006, is made up of Ian Mackintosh and Ben Braun who share song-writing, vocal and musical duties.  Besides the Veronica Mars inclusion, their songs have appeared on TV shows including Grey’s Anatomy, Gossip Girl, Chuck, Rubicon, and How to Make It in America. They have also released two previous albums, The Sound (2007) and Where We Are (2010). Teaming up with Stalfors marks the first time Mackintosh Braun have worked with a producer and enlisting a third set of ears pushed them further outside their comfort zone. “We knew there could be another level to the music, and we’d never worked with a producer,” says Ian. Stalfors proved a perfect foil for the 80’s-inspired duo. From the outset, Ben recalls, “he really understood where we were trying to take the music and the chemistry just felt right.”   Listening to The City Below it’s clear he helped the band enhance its already polished songs with dozens of simple but thoughtful techniques: thinner guitar strings, miking amplifiers in a particular way to get a grittier tone and using old-school analog delay effects like Roland Space Echo.