Posted by ErikRaymond on May 30, 2014 in Arts & Entertainment, Upcoming Events | Leave a comment 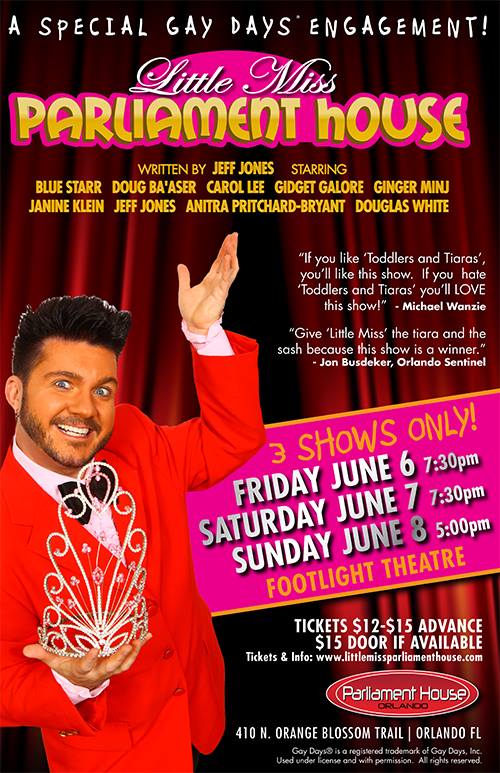 Jeff Jones’s hit production Little Miss Parliament House returns to The Footlight Theatre. The show, which celebrated three previous sold out runs at the Parliament House and a successful run at the 2013 Orlando Fringe Festival, now returns with an updated version just in time for Gay Days 2014.

Join a cavalcade of comics for the crowning of the 2nd Annual Little Miss Parliament House. World famous toddler pageant creator Lionel Del Frisco is your host for America’s most heavily pre-screened and rehearsed “Little Miss” pageant in existence. As Mr. Del Frisco says about everything he does “Perfection is my middle name”.*

*Please note, Little Miss Parliament is NOT a real pageant. In this over the top spoof of Toddlers & Tiaras, the 7 year old girls (and the contestant mothers) will be played by grown men and a couple of talented ladies. This show is simply an example of what it would be like if everything that could possibly go wrong at a toddler pageant actually did go horrifically wrong. Orlando comedian and playwright Jeff Jones plays overly obsessive pageant owner and emcee “Lionel Del Frisco” who runs Little Miss Parliament House, Inc. with his wife (Janine Klein) and business partner, Douglas White. The cast is rounded out by a rotating collection of some of Orlando favorite entertainers including Doug Ba’aser, Carol Lee, Gidget Galore, Blue Starr (June 6 only), Ginger Minj and Anitra Pritchard-Bryant (June 8 only).

This show relies heavily on improvisation so it is never the same show twice. Even the winner will be crowned by judges selected from the audience each night. Expect the unexpected when everything runs awry on stage and backstage in the attempt to decide who will be the next LITTLE MISS PARLIAMENT HOUSE.

No actual toddlers will be harmed at any of the performances of Little Miss Parliament House…yet.