Home » Giveaways » Enter to Win ‘Call Me Crazy, But…’ by Sevyn Streeter! 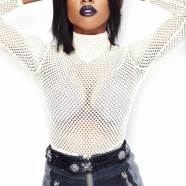 Enter to Win ‘Call Me Crazy, But…’ by Sevyn Streeter!

Posted by ErikRaymond on April 9, 2014 in Giveaways | 2 Comments

The debut EP, CALL ME CRAZY, BUT… by CBE/Atlantic recording artist Sevyn Streeter is available now at the iTunes Store and other digital retailers. The #1 breakthrough smash, “IT WON’T STOP” features her longtime collaborator Chris Brown. What’s more, the companion video for “It Won’t Stop”– directed by and starring the GRAMMY®-winning Brown, with a special guest appearance by Portland Trail Blazers forward Dorell Wright.

For your chance to win a copy, Comment below with the name of the festival that Sevyn will be performing at in July. Winners will be chosen at random, Sunday, April 13th at 12pm ET.

Next up is a national headline tour which will run through mid-April. Sevyn will then join superstars such as Prince, Jill Scott, Mary J. Blige, Lionel Richie, and The Roots at the 20th annual Essence Festival, slated to rock New Orleans July 3rd through 6th. For complete details and ticket information, please see www.sevynstreeter.com/tour.

Sevyn Streeter has cemented herself as a rising R&B star with the success of her solo EP “Call Me Crazy, But…” which debuted at number 5 on Billboard’s Top R&B/Hip-Hop Albums chart. “It Won’t Stop,” the lead single from the EP, has proven a true phenomenon, topping Billboard’s “Mainstream R&B/Hip-Hop Airplay” chart for 9 consecutive weeks, while climbing both Billboard’s “Hot 100” and “R&B/Hip Hop Songs” chart.  In addition, the “It Won’t Stop” companion video – directed by and co-starring GRAMMY® Award-winner Chris Brown, with a special guest appearance by Portland Trail Blazers forward Dorrell Wright – is a YouTube smash, earning more than 22 million views thus far at Sevyn’s official YouTube channel, www.youtube.com/sevynstreeter.

Sevyn Streeter is a 3 time ASCAP award winning songwriter who has been called upon by a remarkable roster of top studio superstars, including Timbaland, Swizz Beatz, Babyface, and many others, with tracks featured on albums by such icons as Chris Brown, Mary J. Blige and Alicia Keys.