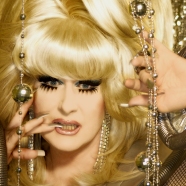 Posted by ErikRaymond on April 7, 2014 in Arts & Entertainment, Upcoming Events | Leave a comment

If you love filth, felicity or food – or all three, then you’re bound to have heard of international drag superstar, Lady Bunny. Born Jon Ingle, she has gained a rabid fan base around the world thanks to her hilarious larger than life personality – and hair, offering up – as she says – “bawdy, Dusty Springfield meets Don Rickles” realness for more than three decades. Her lewd yet zany video parodies, spoofing pop icons with her takes on The Scissor Sisters’ song “Let’s Have a KiKi,” titled “Let’s Have a Kai Kai” and Cher and Christina Aguilera’s song “Welcome to Burlesque,” titled “Welcome to Grotesque” have all but gone viral. Coming up in same drag era alongside Ru Paul, she appeared in films such as Party Girl, Starrbooty, and To Wong Foo, Thanks for Everything! Julie Newmar.

In addition to being a nightclub DJ, promoter, her infamous drag performances, most famously, she is the founder and host of the now defunct annual Wigstock event held in New York for more than 20 years. Bunny is also heavily involved with ACT UP, the international direct action advocacy group working to impact the lives of people with AIDS (PWAs) and the AIDS pandemic to bring about legislation, medical research and treatment and policies to ultimately bring an end to the disease by mitigating loss of health and lives.

I chatted with Bunny last year about biting her tongue on Andy Cohen’s Watch What Happens Live, her passion for politics, a new television show and -of course – who does her hair. (Read the interview here!)