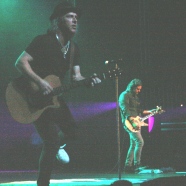 Posted by ErikRaymond on March 7, 2014 in Arts & Entertainment | 1 Comment

It was a night in a time capsule. You can’t think of the mid 90’s without thinking of alt rockers Collective Soul and Live. Both performed to a capacity crowd at St. Petersburg’s Mahaffey Theater on March 2.

Ed Kowalczyk, former lead singer of the alternative band Live opened the show.  The charismatic crooner showered the audience with acoustic versions of a number of the bands greatest hits, including “I Alone” and closed with “Lightning Crashes” with an awe-struck audience singing along.  More than 25 years later, Kowalczyk is still sheer rocker and ageless.  After his set, the humble singer-songwriter met with fans in the lobby. 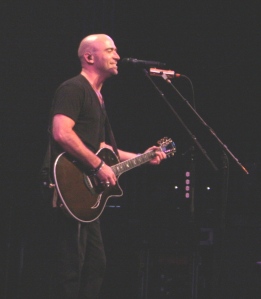 Collective Soul is marking their 20th anniversary and eight studio albums with an ambitious world tour. The band first exploded onto the pop culture radar in 1994, when their debut album which yielded the mega-hit single “Shine”—a song which still receives regular radio play and most radio listeners still know the words to 20 years later.

The audience Sunday night was treated to – not only a stellar rock concert – but also a Storyteller-style performance that any die-hard fan surely cherished.

Roland gives audiences a glimpse into some of their biggest hits. Did you know the high-energy ballad, “Better Now” from their 2004 album Youth is about lead singer Ed Roland’s divorce from long-time wife?

Even at 50, Roland shows no signs of aging, immersing himself and enthralling fans into each song. The band, along with Roland’s velvety live vocals, are akin to listening to a studio album.  In a fun twist, the band performed a reggae cover of Talking Heads’ “My Love Opened the Door,” with the help of the audience. 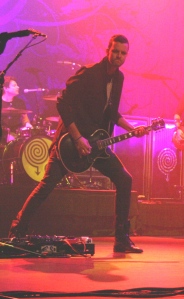 Among the catalog of hits performed, the band debuted three new songs, which will appear on their ninth studio album, See What You Started By Continuing, to be released in the summer of 2014.

When not performing with Collective Soul, singer Ed Roland performs with Ed Roland and the Sweet Tea Project, which released their debut album, Devils ‘n Darlins, in September 2013.