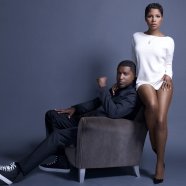 Posted by ErikRaymond on February 1, 2014 in Arts & Entertainment, Giveaways | 4 Comments

LOVE, MARRIAGE & DIVORCE, which will be released Feb. 4, is a long time coming for Toni Braxton and Babyface, who share an all-time total of 16 Grammy Awards® between them.  The album celebrates the strong bond that has been in place between the two artists ever since their first duet on Toni’s 1992 debut, “Give U My Heart,” the R&B smash co-written and co-produced by Babyface (from the Boomerang movie soundtrack).

For Babyface, LOVE, MARRIAGE & DIVORCE will be his first new studio album in nearly seven years, since Playlist (released September 2007), which hit the Top 10 on Billboard’s R&B/Hip-Hop Albums chart on the strength of his rendition of James Taylor’s “Fire & Rain.”  For Toni, LOVE, MARRIAGE & DIVORCE will be her first new studio album in nearly four years, since Pulse (May 2010), the #1 R&B album containing the hit single “Yesterday” featuring Trey Songz.

For your chance to win a copy, Comment below with the name of your favorite Toni or Babyface song. Winners will be chosen at random Wednesday, Feb. 5 at 6pm ET. 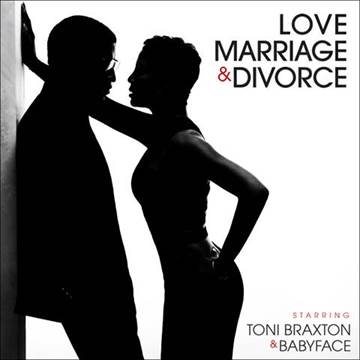 The distinctive, sultry vocals of six-time Grammy Award®-winning recording artist Toni Braxton, singer, songwriter, record producer, and philanthropist, have been celebrated internationally ever since she was first introduced to the world by Babyface and L.A. Reid in 1992.  Her self-titled debut album released the next year was a 10 million-selling phenomenon that generated Toni’s first Grammys® in 1994, for Best New Artist and Best Female R&B Vocal (“Another Sad Love Song”).  The album’s longevity led Toni to win her second Best Female R&B Vocal Grammy® the following year (for “Breathe Again”).  Her second album, Secrets arrived in ’96, and history repeated itself with 15 million worldwide sales.  At the Grammy Awards® in 1997, Toni became only the second woman in history (beside Dionne Warwick) to win Best Female Pop Vocal (“Un-break My Heart”) and Best Female R&B Vocal (“You’re Makin’ Me High”) in the same year.  She returned to the Grammy® podium in 2001, to claim another Best Female R&B Vocal award (“He Wasn’t Man Enough,” from the double-platinum album The Heat).

Into the millennium, Toni blossomed into an acting career with Broadway musical roles in Beauty and the Beast and Aida, and a dramatic turn in the Lifetime movie Twist of Faith.  She and her sisters currently enjoy huge success in Braxton Family Values, one of WE tv’s flagship reality series, which returns for a fourth season in November 2013.  Raising her two sons Denim and Diezel, Toni balances her career demands with the high priorities of family, heath, public service, and charity work, particularly on behalf of the two diseases that have impacted her family directly: She is living with Lupus and her youngest child is living with Autism.  Early detection and intervention has helped both Braxtons to be role models on how to live normal lives with these conditions.  Toni is also a proud spokesperson for Autism Speaks.

10-time Grammy Award®-winning recording artist Kenny ‘Babyface’ Edmonds, singer, songwriter, producer, philanthropist, and record label owner, has been revolutionizing the contemporary pop/Urban music landscape ever since scoring consecutive multi-platinum landmark albums with Tender Lover (1989, with R&B smashes “It’s No Crime,” “Tender Love,” “Whip Appeal,” “My Kinda Girl”); For the Cool In You (1993, with hit singles “For the Cool In You,” “Never Keeping Secrets,” “And Our Feelings,” “When Can I See You”); and The Day (1996, with “This Is For the Lover In You” and “Every Time I Close My Eyes”).  As co-founder with L.A. Reid of Atlanta’s LaFace Records in 1989, Edmonds nurtured the careers of megastars TLC, OutKast, Goodie Mob, Usher, and (starting in 1992) Toni Braxton.  Into the ’90s and ’00s, Edmonds lent his talents to an abundance of hits with artists ranging from Whitney Houston, Michael Jackson and Boyz II Men, to Mariah Carey, Madonna, Eric Clapton, Mary J. Blige, John Mellencamp, Fall Out Boy, P!nk, Beyoncé, Anthony Hamilton, and many others.  Under Edmonds’ belt are more than 125 Top 10 R&B and pop hits, 42 R&B #1 hits, and 51 Top 10 Pop hits (including 16 #1’s), which have generated cumulative single and album sales of more than 500 million units worldwide.  Most recent production work with other artists includes Barbra Streisand, Celine Dion, Keri Hilson, Ledisi, Ariana Grande and Aretha Franklin.  Babyface is also an active touring artist, performing concerts across the U.S. and around the world on a regular basis.

Edmonds is the recipient of numerous awards, including Soul Train Music Awards, BMI Awards, NAACP Image Awards, and American Music Awards.  He received the third BET Walk of Fame Award (following previous honorees Michael Jackson and Whitney Houston), BET’s Entertainer Of The Year at the First Annual BET Awards Ceremony, and most recently was honored with a Star on the Hollywood Walk of Fame. Edmonds’ charitable work is as impressive as his professional accomplishments. His caring and generosity has earned him several accolades, including the Essence Award for Excellence, The City of Hope Award and Variety Magazine’s “Top of the Town” Honored Award.  He was the National Spokesman for Boarder Babies, and personally helped raise more than $500,000 for a transitional home, The Little Blue House, located in Washington D.C..  He has also personally donated more than $100,000 to the VH-1 Save the Music program and he continues to contribute to a host of other worthwhile organizations, including the United Negro College Fund (UNCF).  In 2008, Edmonds combined his musical prowess with his charitable efforts, co writing and producing the song “Just Stand Up” with longtime partner Antonio “L.A.” Reid, which served as the backbone of a multi-purpose breast cancer awareness special.  The song featured such current heavyweights as Beyonce, Rihanna, Mariah Carey, Mary J. Blige, Leon Lewis, Clara, Carrie Underwood, Sheryl Crow, and Miley Cyrus, to name a few.  Edmonds and Reid were honored by the Noble Awards for their contribution to Stand Up To Cancer.  And recently his has been very active in supporting Carousel of Hope, benefiting Children’s Diabetes Foundation and Barbara Davis Center for Childhood Diabetes and Larry Ruvo’s “Keep A Memory Alive” who are committed to improving the lives of patients and their families as they navigate the extraordinary challenges of brain disorders. In Las Vegas, the Lou Ruvo Center for Brain Health treats patients with Alzheimer’s, Huntington’s and Parkinson’s disease, as well as frontotemporal dementia and multiple sclerosis.

For more information, go to : http://www.tonibraxtonandbabyface.com