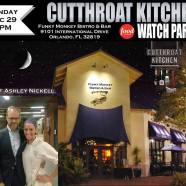 Posted by ErikRaymond on December 28, 2013 in Fire Wire, Upcoming Events | Leave a comment

Funky Monkey Wine Company Chef, Ashley Nickell, will be on the Food Network’s new season of Cutthroat Kitchen. Scheduled to air Sunday, December 29, 2013 at 10PM. Chef Ashley Nickell will show off her culinary chops and sabotage skills on the popular series hosted by Alton Brown.

Cooking skills aren’t enough to win in this competition series; chefs must also be crafty, clever and willing to sabotage their opponents. This game features a briefcase of cash, four competitors, three rounds of cooking and auctions where chefs bid on items to help themselves or hinder their opponents, with Brown acting as the kitchen’s provocateur. After each cooking challenge is announced, chefs gather ingredients in the pantry and then regroup for an auction to bid on culinary curveballs, such as the exclusive use of salt or not allowing their opponents to taste their dishes. A chef is eliminated after each of the three rounds, and the last competitor standing becomes a Cutthroat Kitchen Champion.

“Cutthroat Kitchen is a cooking competition like viewers have never seen before – culinary skills can get chefs into the kitchen, but they will have to play a game of wits to stay there,” said Bob Tuschman, General Manager and Senior Vice President, Food Network.

A viewing party will be held on Sunday, December 29 at Funky Monkey Bistro & Bar Pointe Orlando, located at 1901 International Drive, with Chef Ashley and her team creating amazing complimentary bites.

About Chef Ashley Nickell
Chef Ashley Nickell is the Chef de Cuisine at her family’s restaurant Funky Monkey Wine Company on Mills Avenue in Orlando, Florida. A fan of Alton Brown, she was determined to be on the show. Last July, Nickell was contacted by their casting company with an interview invitation. They loved Nickell’s petite frame, her sweet disposition masking a fiercely ambitious competitor. She was flown out to Los Angeles for filming.

“It was an incredible experience”, she says. “I have always admired Alton Brown and having the opportunity to work beside him was certainly a career highlight. The competition was no walk in the park though, as you will see when it airs”.

The episode, titled “Shrimp or get off the Pot Stickers” is scheduled to air Sunday, December 29, 2013 at 10PM. Nickell will be hosting a viewing party at Funky Monkey Bistro & Bar on International Drive that night.
Connect with Chef Ashley Nickell on Facebook at facebook.com/ashleynicole1638 and Twitter at @nickell_ashley.