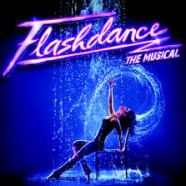 Posted by ErikRaymond on December 3, 2013 in Arts & Entertainment, Upcoming Events | Leave a comment

Picture it. Small-town girl welds by day, dances at night in a bar and dreams of being accepted into a prestigious big-city dance company and becoming a professional dancer. Add in a torn, off-the shoulder sweatshirt, leg warmers, the Billboard hits “What a Feeling,” “Maniac” and “Gloria” and some dynamic dancing. No, it’s not 1983.

Based on the iconic film, Flashdance influenced fashion, the airways, moviemaking and MTV. Inspired by the youthful adventures of writer Tom Hedley and Canadian painter Robert Markle in Toronto and the gritty nearby steel town of Hamilton, it was the first film to use music videos as part of its framework. The movie’s soundtrack sold over six million copies, won a Grammy and the title song won an Oscar.

Now celebrating its 30th anniversary, a new iteration of the cult hit, Flashdance, The Musical takes you back to days of side pony-tails and leg-warmers and offers a contemporary spin with a pulsating, musical score written by Robbie Roth and Robert Cary. Before a five day stint in Orlando, I caught up with openly gay actor Lawrence E. Street, who plays “Joe” to talk becoming butch and his childhood affection for Cynthia Rhodes and Jennifer Beals.

Erik Caban: When did you first see the movie Flashdance and what parts of the film most impacted you?
Lawrence E. Street: [Laughs] I think I was 12 or 13. When you’re a young gay kid and you’re watching a woman like Jennifer Beals in that movie, there’s this feeling of “She’s so cool.” In my head, I was like “What part of her style and her swag can I pull off?” She was sexy, dangerous and beautiful. I thought, “I kind of want to be her.” [Laughs] And the dancing, of course. In the movie she had a really good friend, [played by Cynthia Rhodes], and when she dances to “Manhunt” wearing this black, sexy outfit, she does these like, creepy moves. I remember thinking, “Wow! That’d be really cool to do.” That feeling of, “these chicks are sexy and fun” and “I want to be sexy and fun when I grow up.” Besides being a dancer, I hoped to be sexy and fun. [Laughs] That’s creepy. I can’t believe I said that. [Laughs]

How long have you been paying the role of “Joe”?
Our first rehearsal was a year ago November. I was cast in late October and started rehearsals right away.

What made you want to play this character?
I wanted to work with Sergio Trujillo, the director. He’s a major force right now, in musical theatre. I had stars in my eyes to have the chance to work with him. It didn’t even need to be this show; it could be any show. [Laughs]

Going back a bit, how did you get your start in theater?
Going way, way back, I grew up in this little town in New Jersey. They had a program in my town called “Summer Drama Workshop.” Kids from 5th grade to 12th grade got to work on a musical for two months; July and August. That’s where I did my first musical. I had a blast. I remember we did Bye, Bye Birdie.

What’s your favorite part of this production?
I really do love the part [of “Joe”]. My character is kind of the voice of reason. He’s just an everyday guy. His family owns the steel mill and he’s that genuine, salt-of-the-earth kind of guy. I like the challenge of playing this… ”simple” character. It’s hard, actually, because I’m better at [playing] extreme characters; extremely funny, extremely weird, extremely extreme. To play a guy that’s just…a dad, or an uncle or a guy on the street, it’s not easy.

Are there any differences from the movie version?
Yes. In addition to the main songs from the movie, our songwriters and lyricists have written 16 other songs. They still have that “Maniac” feel – definitely the great part of the 80’s. They fit the show and they fit the time great but they also add more to the story. A lot of the really great dance numbers are based around these new songs.

Which song is your favorite to perform and why?
I sing a lot in the show but I’d have to say the opening number called “Steel Town Sky.” It’s set during the working day at the mill, so there are all these sounds of metal and fire and workers. Very butch. [Laughs] It has the full company. It’s great, it’s fun, it’s high-energy. It sets the tone for the show.

A little secret; most of the ensemble is women and in the scenes where we needed more boys on stage, it’s women in man-drag. That’s something to look for.

The movie, Flashdance, is known for its underlying message of empowerment and self-confidence. Have you found that the stage production still offers that?
It really does. Like the main character, “Alex,” we’ve all had that moment where we know what we want to do – fill in the blank – be a pitcher on baseball team, write poetry, play an instrument, be a good dad, be a good mom. You know that you have the ability inside you to do it but you also have fear. It’s universal. That feeling of, “How do I get past this fear to get what I want?” That’s most definitely in the musical. And just like in the movie, Alex has help. She has her two best girlfriends, her mentor Hannah, us, the guys at the steel mill who want to see her succeed. Myself and all the other guys at the steel mill know that, while she’s good at her job, this girl wants to dance. So, we’re behind her. She has all these cheerleaders to push her to pursue her dream. From there, it’s up to her. She has the love, she has the support, now it’s up to her to get out of her own way.

What do you hope audiences will take away from the show?
Hmm. One of the great messages is how wonderful dance is – even though I’m not a dancer in this show – there’s so much dancing in the show.  “Alex” and her crew show just how much fun it is to dance; male, female, young, old. Get up and dance. I think that’s a great message of the show.

The other is that simple message of, “Go for your dreams.” Don’t get intimidated or sidetracked or scared. Ask for help. Go for what you’re passionate about.

Lawrence E. Street plays “Joe” in the stage production of “Flashdance, The Musical”

Like Loading...
← Enter to win the ‘Youth’ EP from Foxes! Enter to Win ‘Britney Jean’ by Britney Spears! →