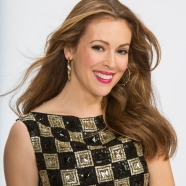 Posted by ErikRaymond on November 7, 2013 in Arts & Entertainment | Leave a comment

Project Runway All-Stars returned for a third season, which premiered October 24 on Lifetime. In its most competitive season ever, the best of the best – including three past winners – return to compete for a second chance at runway gold. With new host Alyssa Milano and mentor, TV fashion correspondent and Marie Claire’s Senior Fashion Editor Zanna Roberts Rassi, this season’s designers must prove to Project Runway All Stars’ esteemed panel of judges, Isaac Mizrahi and Georgina Chapman, that they can sew, stitch and shred …again.  A surfeit of celebrity guest judges this season include Abigail Breslin, Kristin Chenoweth, Debbie Harry and former winner Christian Siriano.

Another new ground-breaking addition to this season is the return of Ari South, formerly Andy South.  South was season eight’s third place winner and a fan favorite. Now, three years later, she is living as a transgender woman, fashion designer and paving uncharted territory for transgender people both within – and outside – the fashion world.

I talked with the design powerhouse about her journey to finding her identity, her ongoing mission to educate the world about the transgender community and why she’ll win Project Runway All-Stars: season 3. 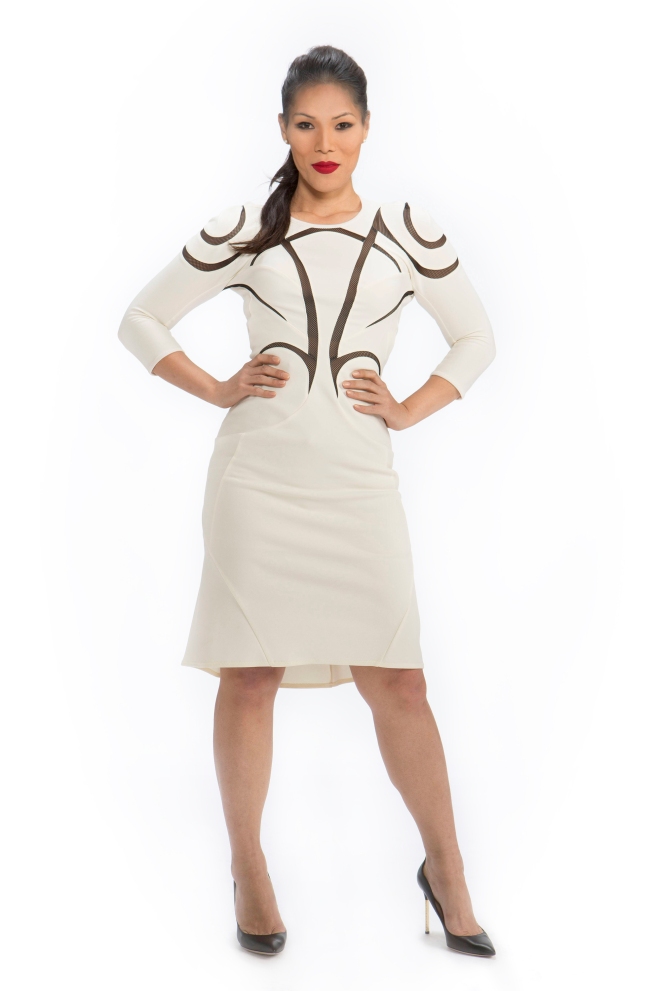 Erik Caban: What have you been doing design-wise since your first appearance on Project Runway?
Ari South: I launched a brand, Andy South, which is now in its third season. It’s been doing very well for me. I took my third place win and made it work for me. And that’s what it’s all about.

How would you describe your design aesthetic?
It’s not as S&M as it was in the beginning of season 8. Very dark, very rough; “rough” in the sense that is was very severe. Now I feel I’ve balanced and developed who the woman [I’m designing for] is.  She’s still a strong woman but she has a sense about her that’s elegant with a little bit of bite. There’s a compromise between her feminine side and her warrior side.

Why do you think you are going to win Project Runway All Stars: Season 3?
[Laughs] I’m going to win because I know I’m ready. It’s a matter of knowing it’s the right time for me. I’ve grown in ways that I haven’t grown before [my first time on] the show. I used that time [since season 8] to develop as a designer, as a brand, as a clothing designer and that’s what I’m coming back with; that maturity as a designer and as an artist. So, there’s no question. [Laughs]

Are there any insider tips you can offer viewers on what to expect this season?
Expect a lot of stiff competition. The talent level is so high this season. I know a lot of people second guess whether or not the cast is true “all-stars” but this season, I’d say, is the best of all three, in terms of the designers they brought back. They even brought back season winners. There’s definitely no filler. I always notice there are a few designers that are there just so the judges have someone to send home. At this point, even after the first episode, there was no telling who would stay and who would leave because everyone is at the same talent level. Everybody did a great job and it’s been getting harder each challenge to figure out who is going to go home.

There’s definitely a plethora of celebrity guest judges this season. Which was the biggest surprise to you?
I loved Debby Harry. For me, meeting this woman behind the music I’ve listened to for years, was interesting.  I never really followed her in particular but her music has definitely been woven into my life for sure. It was really nice to meet the artist behind it and to see where she is now. That was my favorite. 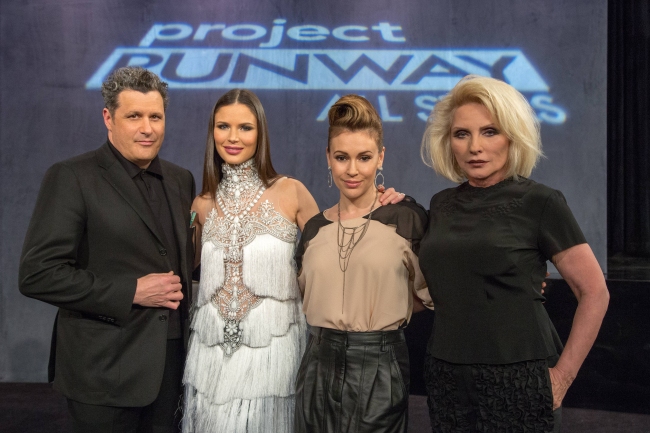 What has your experience been like transitioning?
It’s been good. It’s been really, really great actually and I’ve been very happy. It’s been a journey of triumphs and success and also a lot of struggles still. I think that would be the case with anyone but I know that I made the right choice. I know that I’m living my life the way that I need to in order for me to be happy and healthy, and to simply soar. The response here in Hawaii is beyond amazing. That’s not to say I go everyday without my share of backlash. It’s been an immense journey that I’m looking forward to continuing. My fans have been really great support. My fans are more than just fans. That’s in part due to fact that I share a lot of my personal life on social media. That’s allowed me to get the word out and live physically and to be transparent about things that people should be more aware of. There’s a lot about [being transgendered] that’s not said or known. So, I like the idea that I can share my life with people who may have never met anyone who is transgendered and to open their eyes to sheer humanity and genuine people that are living this life. I couldn’t have asked for anything better. Beyond amazing.

You mentioned that you are trying to educate others about the transgender community. Can you tell me more about that? Are there any specific organizations you are truly passionate about?
I work a lot with the life foundation here in Hawaii. We meet at a non-profit agency that supports HIV /AIDS prevention. They also have a transgender organization they work with, so I try to stay as involved as I can. I don’t ever want it to be a case where I feel like people think, “Ari’s garnering all this success and not taking [the transgender community] along.” I want other men and women who are transgendered to realize that “you can do it, too.” You can achieve all of your goals and it’s interesting because a lot of them don’t think that they can because of who they are. The most unfortunate thing I‘ve learned is that a lot of them think the only careers they can have are in hair, beauty and…illegal things. I like opening their eyes to realizing they can achieve everything that they want. I see that every time I work them or bring them into the studio. I want the trans community to know that there’s much more out there for them.

I also teach at the university here in the fashion program. I feel that by just being visible and being myself with the students instills in them that they have to treat people with respect. That’s really what it comes down to.  I think a lot of the education I’m doing on the trans community comes from my everyday interactions; with the students, with the organizations here and I do some things with organizations in San Francisco every now and then. It’s been a very fulfilling journey. Every day I’m thankful for the amount of change that can happen.

How long had you struggled with your decision to transition?
It was years before season 8. The older I got, the more I struggled with it. For some period of time, I kind of put it on the side because I focused on other things. I focused on my schooling and my career. For me, that was a way to distract me from dealing with the issue. I hate to call it an “issue” in the sense that it was “terrible” and “tormented my life” but it really can prevent you if you deny it. I actually stopped my treatments before getting cast. It wasn’t intentional; I just happened to get called for the show and chose to stop my treatments so I wouldn’t have to talk about it. I needed time to figure things out on my own. I knew that if I brought it up in the context of me being on the show, it would have muddied up the water for me – with my own decision making, my own preferences and what I needed to do for myself. I kept it to myself because I felt that it was for me to figure out.

What has your experience returning to the Runway been like?
It’s been awesome! Everyone’s been so great. The fellow designers are so supportive and loving. They were so respectful. Seth Aaron was on the panel when I was cast. He said, “I’ve met you many times before and I know your work when I see it. But this time, I feel like I’m meeting you for the first time.”

I hadn’t met a lot of these designers before, since I’m the only contestant from season 8, so I had to build relationships. For me, I felt like I was going into it like a lone wolf but I’ve made great friends and still talk to most of them post-filming. It was a really great cast with a high maturity level. We all were really focused on the competition and what we were doing. It was nice to be in that kind of environment and not have the one or two “kids” that would be causing drama. It’s just been…wonderful and amazing; those are the best words I can use to describe it. [Laughs] 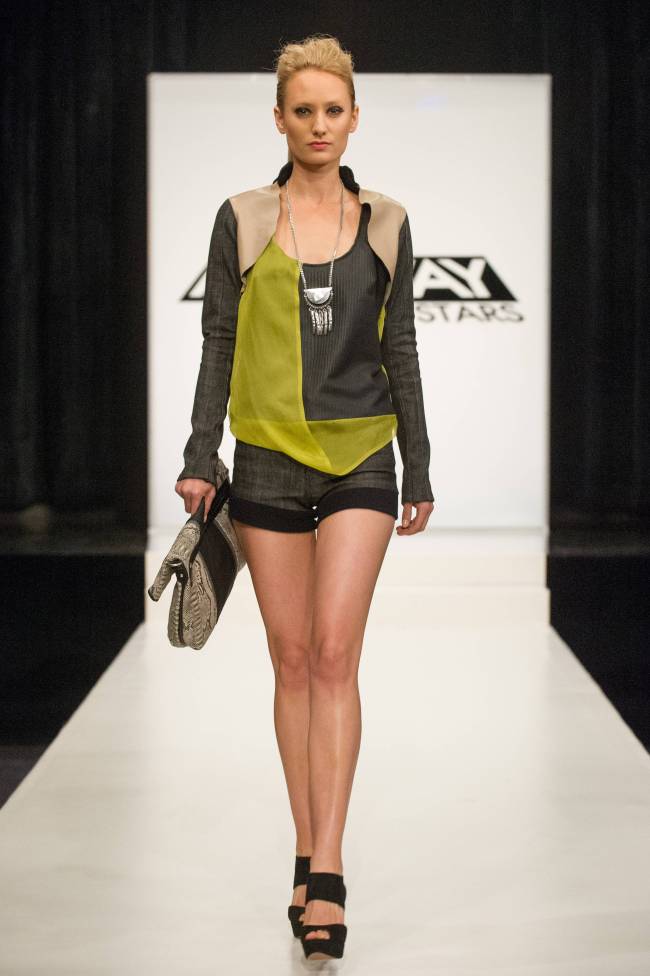 Like Loading...
← Meet the choreographers behind Britney Spears’s “Work Bitch,” The Squared Division! Enter to win ‘Loved Me Back To Life’ from Celine Dion! →