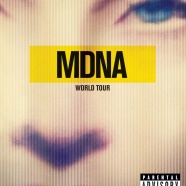 Posted by ErikRaymond on September 5, 2013 in Giveaways | 3 Comments

The two hour nonstop performance includes songs from Madonna’s MDNA album such as “Girl Gone Wild” and “Gang Bang,” as well as fan favorites including exhilarating versions of “Hung Up,” “Express Yourself,” “Vogue,” “Open Your Heart,” “Like A Prayer” and “Celebration.”

Available September 10 on DVD, Blu-ray, and as a digital album from Live Nation and Interscope Records.

Simply Comment below with the name of Madonna’s first world tour. Winners will be chosen at 5:30pm ET, September 10th.

Like Loading...
← The Lady is a Bunny: The iconic Lady Bunny Returns to Central Florida Is it Possible to Get Crabs on Your Eyelashes? →