Home » Arts & Entertainment » Behind the Babes of Broadway Brunch: Ginger Minj and The Minx 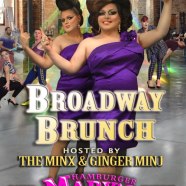 Posted by ErikRaymond on July 28, 2013 in Arts & Entertainment | Leave a comment

Behind every great drag queen is an equally great and talented man. Joshua Eads-Brown and Philip Cain are the dexterous duo behind Ginger Minj and The Minx. The two currently host the paramount production that is Broadway Brunch every Sunday at Hamburger Mary’s in Orlando.

What began as a modest musical brunch in the fall of last year has rapidly flourished into a cast of 15 in a full-scale production-style show. The climax was this past December when Hamburger Mary’s Orlando owners Mike Rogier and John Paonessa opened the historic locale Cheyenne Saloon, located next door, for a night of larger-than-life production numbers followed by a street dance party. A few months later, after Minj and Minx again hosted the second edition of “Brokeback Mary’s at Cheyenne Saloon” confirmed that it was a huge success. The audience nearly tripled from the first time and the extravagant Broadway performances had the audience raining money.

“The Minx and I are show tune lovers through and through, so we knew we wanted to focus on our strengths, and Broadway Brunch had a nice ring to it,” explains Minj.

Both Minx and Minj come from theatrical backgrounds and both began their drag careers roughly at the same time.

“I think everyone has an artistic yin to their yang, and I feel like the Minx is mine,” adds Minj.

Their alter egos Eads-Brown and Cain have been involved in theatre since the age of four, taking on both male and female roles. So, where did the larger than life personas of Ginger Minj and The Minx come from?

Minj explained that it’s a long story but began while performing in drag at Sleuths Mystery Dinner Show eight years ago.

“Someone told me about the wonderful world of drag pageantry and I decided I wanted to give it a try, but realized that I’d have to come up with a name…and money,” describes Minj. “The owner of Sleuths – an avid drag lover – offered to help me pay for my gowns and costumes if I would use the name “Ginger Minj” as a nod to the company.”

According to Minj, Sleuths lore has it that in the early days of the dinner theatre, an actor playing an old Scottish man referred to a red-headed woman in the crowd as a ginger minge (British slang for someone with a, for lack of a better term, “fire crotch.”)

Apparently, the guest didn’t find it amusing and punched the actor in the face, in front of the entire audience, forever solidifying the moment in Sleuths’ legend.

“And Ginger was my favorite character on Gilligan’s Island,” she adds.

“[It’s a] story that involves a crazy straight man in Atlanta that I had never met before and my now partner, who I had just met and couldn’t remember my real name,” Minx says.

She has also been performing drag for about eight years. She says it started over a goal to create a float in the Orlando Pride parade that year.

“We put together a Wicked float and I did drag on it as “Elphaba,” Minx says. “Word got out that we were doing a float and that year three other organizations in town decided to do one as well. The next year, my friends decided to enter me in my first [drag] pageant – since we were all a bunch of theater folks just desperate for an outlet to entertain. I won that pageant (Miss Central Florida Newcomer) and the rest is history.”

Besides Hamburger Mary’s – which Minj explains is a full time gig between rehearsals and creating costumes for 15 dancers – is still currently an actor and wig master at Sleuths Mystery Dinner Shows, and can also be seen every first and third Saturday of the month at the Ultra Lounge in Cocoa Village.

“I call it “Cheers for Queers,”” says Minj. [It’s] a great little bar where everybody knows your name!”

Minj is no one-drag pony. When not pairing food and entertainment between Hamburger Marys and Sleuths Mystery Dinner Shows, Minj keeps busy amongst Orlando’s theatre scene, often playing drag queens, gay men, and roles traditionally played by women. She says she has enjoyed runs as Mary Sunshine in Chicago, Mama Rose in Gypsy, Jake in Evil Dead and the Lion in The Wiz.

After growing up in Lake County, at the age of 18, Minj moved to New York City with nothing but a backpack and $5,000. She eventually landed a job as a cast member with the Broadway company of Disney’s Beauty and the Beast.

“Three years later, my time in NYC came to an end. I met the man who would become my husband and we decided to move back to the Central Florida area to start a new life together,” dotes Minj.

Aside from hosting Broadway Brunch at Hamburger Mary’s Orlando with Ginger Minj, The Minx performs alongside Minj the first Saturday of every month at Ultra Lounge in Cocoa Village.

Besides performing, the Minx, alongside longtime partner Jimmi Rossi, owns a production company together called Wicked Designers. Having grown up in the theater, hailing from Rockford, IL having been on stage since the age of four, The Minx says she is, however, getting the itch to do another theater show.

“I see drag as an outlet to play all of the great female roles that I always wanted to play,” she says.

Besides Hamburger Mary’s and Ultra Lounge, look for Ginger Minj and The Minx at the Miss Comedy Queen Pageant August 5 and 6 at Parliament House Orlando. 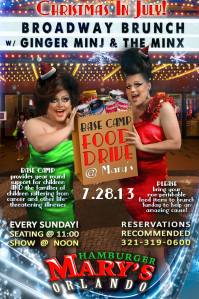 Who: Ginger Minj and The Minx
What: Broadway Brunch at Hamburger Mary’s Orlando
When: Sundays at 11:00am
Facebook Links: BroadwayBrunchAtHamburgerMarysOrlando or GingerMinj or TheMinx