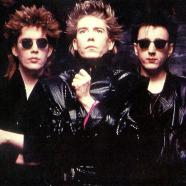 Posted by ErikRaymond on July 23, 2013 in Arts & Entertainment, Upcoming Events | Leave a comment

After 36 years, The Psychedelic Furs are showing no signs of slowing down. The band will kick off the Florida leg of their US tour July 26 at Plaza Live in Orlando with Spacehog, followed by dates at the Culture Room in Ft. Lauderdale, July 27 and The State Theatre in St. Petersburg, July 28.

Led by vocalist and songwriter Richard Butler, and his bass-wielding brother Tim, the Furs won over fans and critics alike by combining poetic lyrics, innovative rhythms and melodies driven by an aggressive, punk desperation. The band scored major hits with “Love My Way,” “Pretty In Pink,” “Heaven,” “The Ghost In You,” and “Heartbreak Beat;” in all releasing seven studio albums.

During a hiatus in the early 1990s, the Butler brothers went on to create the band Love Spit Love along with Guns ‘N’ Roses guitarist Richard Fortus and drummer Frank Ferrer. Love Spit Love released two albums – which included the notable hit single “How Soon Is Now?”

The Butlers reunified The Psychedelic Furs in 2000 and released a live album Beautiful Chaos: Greatest Hits Live, which also featured a new studio recording, “Alive (For Once In My Lifetime).” Since then, lead singer Richard Butler has released a solo album and has hinted at the possibility of a new Psychedelic Furs album.

Tim and Richard Butler remain the two original members of The Psychedelic Furs.