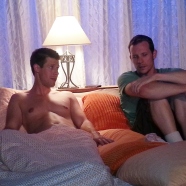 Posted by ErikRaymond on June 14, 2013 in Arts & Entertainment | Leave a comment 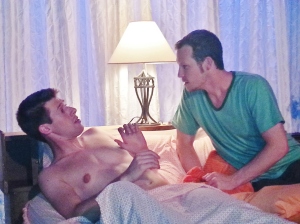 Not to be confused with the 1955 film, this stage production of Pillow Talk takes you inside the personal lives of two male friends on a road trip who, after a pit stop, learn more about life – and each other – than they ever imagined. Akin to a sitcom about two gay men visiting home, the duo address neuroses, intimacy and friendship in this poignant tale.

After a successful, sold-out run at this year’s Orlando Fringe, Pillow Talk, the bold, raw, yet innocently honest play by television producer, director, and screenwriter Peter Tolan – best-known for his work on Murphy Brown and Home Improvement – will make its debut at Parliament House’s Footlight Theatre beginning June 15. Reprising his Fringe role, Kurt Roth as “Aaron” along with local favorite Steven Johnson, stepping into the role of “Doug,” in this clever 1989 award-winning play that unfolds more like sketch comedy than drama.

“Throughout this process, I have become more aware of my friendships and how we mutually help each other out through our lives,” says first time Director/Producer Jamie DeHay.

While the show was infamous at Fringe for boasting nudity – even winning the “Best Nudity” award – DeHay hopes people see that at the heart of the story a number of poignant issues are addressed, including LGBT themes like a fear of being exposed and a fear of what might happen.

“Whether they realize it or not, Aaron and Doug both get something out of each others’ friendship,” he says. “They help each other with their personal difficulties.”

Playing a character that blurs the lines between gender roles and involves nudity comes easy to openly gay actor Johnson, who many may recognize by his various other roles in town, including being part of the ensemble of Ginger Minj and The Minx’s Broadway Brunch every Sunday at Hamburger Mary’s and last year’s Fringe production of Everybody Loves Chlamydia, in which he played “Lust.”

“I’m the go-to actor for any role needing to be naked,” jokes Johnson.

After original cast member Jay Pastucha who played “Doug” in the Fringe production couldn’t return to go on tour with another show, Johnson was quick to step in.  Despite Pastucha and Roth’s real friendship off-set and building chemistry on-set, Johnson says he had no problem stepping into this role after seeing four productions at this year’s Fringe.

“We were able to build our chemistry on the fly, in a matter of a few rehearsals,” says Roth. “We have a very different feel and vibe.”

Both Roth and Johnson have an arsenal of acting credits. Roth’s career has taken him from UCF musical theatre to commercials and film. Johnson has done countless projects from Disney to Dancer’s Edge Studio, headed up by Orlando veteran visionary/choreographer/dancer/producer Willy Marchante to a number of Fringe shows over the years and back again.

After this production, Orlando will bid adieu to Jamie DeHay. After more than eight years in Orlando, gracing backstages for a number of companies around town, including a five year stint at a certain show involving clowns and acrobats, he is off to The University of North Carolina School of the Arts to study Scenic Design.