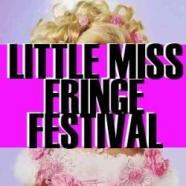 Posted by ErikRaymond on May 23, 2013 in Arts & Entertainment | Leave a comment

Jeff Jones returns for the crowning of the 2nd Annual Little Miss Fringe Festival. No, “Little Miss Fringe Festival” is NOT a real pageant. The seven year old girls and their mothers are played by a rotating cast of Orlando‘s funniest performers. In the show, world-famous toddler pageant creator Lionel Del Frisco (Jones) hosts America‘s most heavily prescreened and rehearsed “Little Miss” pageant in existence.

Jones brings his cast of “Craigslist contestants” to the Fringe stage in this more elaborate version of his Little Miss pageants. Janine Klein shines as a less-than sober “Virginia Del Fresco.” The methed-out chemistry on-stage is as perfect as his pageants. The added timely Fringe and political jokes offer an extra bite.

The king of improv, Mark Baratelli makes a cameo in a number of performances. I don’t know why but Baratelli is always spot-on in his portrayal of crazed train wreck. Wickedly funny, he literally steals the scene. Baratelli’s intricate yet brutal answers to the judge’s questions are absurdly hilarious. For example, when asked “What’s your “IT” factor?” his character simply gestures between her legs and at one point straddles the judge’s table. Carol Lee is punny and self-loathing as always. In this performance, she plays “Jaguar Goldman” as self-proclaimed “butter face.” Her convincing portrayal of a little girl with IBS, attempting to contain flatulence took the crowd’s breath away, bringing most to tears – with laughter. Gidget Galore offers up a new, more twisted pageant mom/daughter duo. Her “Mrs. Kibble” is akin to Kathy Baker ala Edward Scissorhands. And her daughter, “Maggie Kibble” is a real dog…lover, that is. Addison Taylor plays a 7 year-old nudist who truly lets it all hang out.  The show is definitely not for the prude but a true winner!