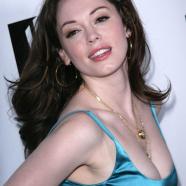 Posted by ErikRaymond on October 26, 2012 in Arts & Entertainment | Leave a comment

Rose McGowan, best known for her wicked roles in Jawbreaker, Scream, Charmed, Grindhouse, and, most recently, Conan the Barbarian, has a lot of gay pride. The actress claims that she makes even her gay friends seem not as gay when she’s around and campaigned against Proposition 8, which sought to ban same sex marriage in the state of California.

Up next, the 39 year old actress will star in the spooky The Tell Tale Heart, based on Edgar Allan Poe’s story. McGowan was tight-lipped about details of her return to television this fall for a new series on ABC.

Fresh off a plane, McGowan granted me an exclusive interview before her appearance at Spooky Empire’s The Ultimate Horror Weekend in Orlando.

Tell me about what you’ll be doing at Spooky Empire in Orlando this weekend.
I’ll be there promoting Scream, Charmed, and Grindhouse.

Is this your first time doing one of these?
Yes. It’s fun to be able to meet people one on one. Generally, you’re kept back from people, so this will be a completely different experience to see the people that are your fans. It’s special.

I have to warn you though; you’re going to encounter quite a few gay nerds.
That’s ok. They’re my favorite! If you have to be a nerd, you might as well be gay. It’ll just make me happier.

With roles in great gay cult hits like Jawbreaker, Scream and Charmed, it’s no surprise you built a large gay fan base. You definitively seem to shine in those venomous/vixen roles. Gays love a good vixen.
[Those roles] come pretty easy to me. It’s funny; if you know me, I’m actually pretty easy-going and laid-back. I watch a lot of classic films and those roles really inspire me. Actresses like Bette Davis and Joan Crawford have played some amazingly evil people. Barbara Stanwyck is my favorite, actually. I’ve kind of patterned my characters by their performances. I wouldn’t say I try to copy them – but try to pay homage. Those actresses never had to say the lines I have, that’s for sure.

When do you think you established your gay iconic status?
In my mind, it was probably when I was little and I would protect the gays from the bullies at school. When I was 13, I was a runaway and taken in by a drag queen in Portland, Oregon. I used to go to gay nightclubs and dance the night away. So, it’s pretty much been a constant in my life, for as long as I can remember. I never felt like all-of-a-sudden, I gained a gay following, it’s always been part of my world. I’m the only one, among my gay friends, that’s gone to civil rights marches, pro-equality marches, participated in the No H8 Campaign. Then, I realized, I’m the only one there marching and they’re gay and not doing it. I need to find some straight people causes and make them go.

You clearly have an affinity for your gays. Do you have any interesting stories about your gay fans?
Just that they’re my favorite. To be honest, I don’t look at them as…”gay fans,” they’re just fans to me. They are usually the most fun to talk to and that makes me happy. They tend to know a lot of lines from my movies.

I read that you were even “gay bashed” when you were younger because you were mistaken for a man coming out of a gay club.
That was when I was living in Portland. I had really short hair and was wearing a little 1940s style men’s suit. I was even smaller back then and I had on these little chunky shoes; I got clocked. This guy [that hit me] made the mistake of thinking the gay friends I was with were weak. Instead, they turned around beat the hell out of him.

You mentioned in a previous interview that you felt uncomfortable getting married to your fiancé at the time since your gay friends couldn’t. Would you say that’s a stance you still stand by?
Yes! It’s infuriating. My assistant, who’s a lesbian, is engaged to a woman. Right now, she can’t get married but she’s engaged until she can. That is completely and utterly absurd to me. I would feel disingenuous to get married and invite a bunch of people to my wedding that could not partake in that themselves.

What you’re take on this upcoming presidential election?
I still want Hillary. It’s not so much that I’m pro Obama but that I’m anti Romney. I feel like besides gay issues, Romney’s such a woman hater. It’s amazing to me that somebody can be that bigoted towards 50% of the population. Even during the debate, somebody asked him what he do as far as pay equality and things like that and he said he’d make sure women could get home by five o’clock so that she could cook dinner for her family. Really?! That’s what we’re going to elect? And the fact that any woman would vote for him is shocking to me. I think so many rights will be denied if Romney wins. It’s a tough time for all of us.